Variable tint lenses are optical lenses that darken on exposure to specific types of light of sufficient intensity, most commonly ultraviolet (UV) radiation. In the absence of activating light the lenses return to their clear state. Photochromic lenses may be made of glass, polycarbonate, or CR39 plastic.

They are principally used in spectacles that are dark in bright sunlight, but clear in low ambient light conditions. They darken significantly within about a minute of exposure to bright light, and take a little longer to clear. A range of clear and dark transmittances are available. In one sort of technology, molecules of silver chloride or another silver halide are embedded in photochromatic lenses. They are transparent to visible light without significant ultraviolet component, which is normal for artificial lighting.

In another sort of technology, organic photochromic molecules, when exposed to ultraviolet (UV) rays as in direct sunlight, undergo a chemical process that causes them to change shape and absorb a significant percentage of the visible light, i.e., they darken. These processes are reversible; once the lens is removed from strong sources of UV rays the photochromic compounds return to their transparent state. 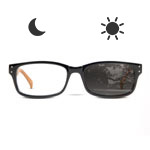 The glass version of these lenses achieve their photochromic properties through the embedding of microcrystalline silver halides (usually silver chloride) in a glass substrate. Plastic photochromic lenses use organic photochromic molecules to achieve the reversible darkening effect. These lenses darken when exposed to ultraviolet light of the intensity present in sunlight, but not in artificial light.

With the photochromic material dispersed in the glass substrate, the degree of darkening depends on the thickness of glass, which poses problems with variable-thickness lenses in prescription glasses. With plastic lenses, the material is typically embedded into the surface layer of the plastic in a uniform thickness of up to 150 µm. This offers a uniform darkening of the lens, regardless of the thickness

Typically, photochromic lenses darken substantially in response to UV light in less than one minute, and continue to darken a little more over the next fifteen minutes. The lenses begin to clear in the absence of UV light, and will be noticeably lighter within two minutes, mostly clear within five minutes, and fully back to their non-exposed state in about fifteen minutes. A report by the Institute of Ophthalmology at the University College London suggested that at their clearest photochromic lenses can absorb up to 20% of ambient light. The newer Plastic lenses absorb as little as 5% indoors and are almost completely clear. Recent advancements have put an emphasis on getting the lenses to “lighten quicker” indoors

Because photochromic compounds fade back to their clear state by a thermal process, the higher the temperature, the less dark photochromic lenses will be. This thermal effect is called "temperature dependency" and prevents these devices from achieving true sunglass darkness in very hot weather. Conversely, photochromic lenses will get very dark in cold weather conditions. Once inside, away from the triggering UV light, the cold lenses take longer to regain their transparency than warm lenses.

Photochromic lenses have come a long way since they were first invented in the 1960s. Early versions of these so-called photochromic lenses were plagued by slow darkening or lightening, and sometimes the lenses would get stuck midway. Newer models of the changeling spectacles are much quicker to activate and fade, and they come in both glass and lightweight plastic.

The first photochromic lenses were made of glass and developed by scientists in the U.S. at Corning. The company has made improvements to its original process over the years, but in general, the science remains the same, says Lionel M. Tanguy, a glass application engineer at Corning Ophthalmic, in France.

Photochromic lenses are available in nearly all lens materials and designs, including high-index lenses, bifocals and progressive lenses. An added benefit of photochromic lenses is that they shield your eyes from 100 percent of the sun's harmful UVA and UVB rays. Because a person's lifetime exposure to sunlight and UV radiation has been associated with cataracts later in life, it's a good idea to consider photochromic lenses for children's eyewear as well as for eyeglasses for adults.

Polycarbonate is the safest lens material for kids, providing up to 10 times the impact resistance of other lens materials. Though photochromic lenses cost more than clear eyeglass lenses, they offer the convenience of reducing the need to carry a pair of prescription sunglasses with you everywhere you go.

Since the lenses automatically adapt to light conditions, they reduce eye strain and fatigue indoors and squinting in sunlight. The rapidly changing lenses can also lessen glare by regulating the amount of natural light you are exposed to. The degree of darkening depends upon the amount of light. You’ll never be stuck with uncomfortable shades that let too much or too little light in.

Variable tint lenses darken within a mere 30 seconds and turn clear again just as fast. They maintain about 5-percent residual tint when indoors.

Light sensitivity is reduced, because the lenses protect the eye from harmful UV rays. Reducing exposure to UV rays lowers the risk of cataracts and other age-related eye issues. The level of protection adjusts itself depending on the needs of your eyes.

This lens is available in brown and gray variable tints to suit your personal style.

They’re also available in most lightweight lens materials and can apply to all forms of lenses, such as single vision, bifocal, and progressive lenses.

The lenses can save you money as you don’t need to buy separate prescription eyeglasses and sunglasses.

Your vision will be crisper and colors will appear more vivid in sunlight.

Variable tint lenses are strongly recommended for situations where you are indoors and outdoors within minutes, such as window shopping or having lunch on an outdoor patio. You won’t need to do the sunglasses-eyeglasses shuffle, which inevitably results in forgetting your spectacles somewhere.

Variable tint lenses are ideal for children who have difficulty juggling more than one pair of lenses. Since eye damage results from your lifetime exposure to UV rays, protecting children while they are young can ward off problems in the future.

You may have to take off your spectacles for outdoor photos. Since the lenses darken as soon as you walk outside, your eyes will be obscured in pictures. If you’re trying to cultivate the rock star look, you can add this to the pro column.