A pinguecula can be described as a small elevated mass on the white of the eye. It is usually slightly yellow in colour. The main culprit for the formation of a pinguecula is ultraviolet exposure, and this is further aggravated by wind and dust. When one has a history of a dry eye, this can further add to the development of a pinguecula. They are often confused with a ptyrigium, but they differ in that they don’t invade the cornea, they are slightly raised, and their development and growth is a lot slower than that of a ptyrigium. They do however have the same symptoms as a ptyrigium being itchy and burning when they occasionally become inflamed.

Symptoms and inflamed flare-ups can be minimised by wearing good quality sunglasses with a 100% UV filter. Regular use of dry eye drops can further offer relief, especially if they have become inflamed. Surgical removal is only indicated in extreme cases. 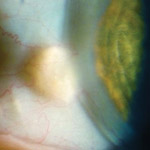 A pinguecula can make your eye feel irritated or dry. It can also make you feel like you have something in your eye. Or you might have a gritty feeling as though you had sand or other rough particles in your eye. The affected eye might also itch or become red and inflamed. These symptoms caused by pingueculae can be mild or severe. Your eyecare practitioner should be able to diagnose this condition based on the pinguecula’s appearance and location.

A pinguecula is yellowish in colour and typically has a roundish or oval shape. It’s a small raised patch that grows close to your cornea. Your cornea is the transparent layer that lies over your pupil and iris. Pingueculae are more common on the side of your cornea closer to your nose, but they can also grow next to your cornea on the other side. Some pingueculae can grow larger, but this occurs at a very slow rate and is rare.

In most people, pingueculae don't cause many symptoms. But when they do, those symptoms usually stem from a disruption of the tear film which may not spread evenly across the surface of the eye around it, causing dryness. This can cause dry eye symptoms, such as a burning sensation, stinging, itching, blurred vision and foreign body sensation. Another symptom of pingueculae is the appearance of extra blood vessels in the conjunctiva that covers the sclera, causing red eyes. In some cases, pingueculae can become swollen and inflamed. This is called pingueculitis.

A pinguecula forms when the tissue in your conjunctiva changes and creates a small bump. Some of these bumps contain protein, fat, and calcium, while others contain protein and either fat or calcium.

Ultraviolet radiation from the sun is the primary cause of the development of pingueculae, but frequent exposure to dust and wind also appear to be risk factors. Dry eye disease also may be a contributing factor and can promote the growth of pingueculae.

To decrease the risk of pinguecula, it's important to wear sunglasses outdoors even on overcast and cloudy days, because the sun's UV rays penetrate cloud cover. Sunglasses are as important in winter as they are in summer, even though the sun is lower in the sky in winter. For the best protection, choose sunglasses with a wraparound frame design, which block more sunlight than regular frames. 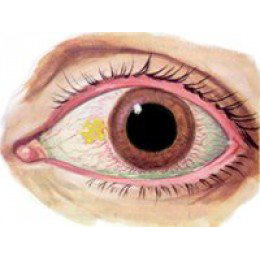 Pingueculae are more common in middle-aged or older people who spend a lot of time in the sun, typically they occur between the ages of 20 and 50, but they also can occur in younger people and even children — especially those who are often outdoors.

Just like pterygia, pingueculae are also thought to be caused by environmental factors, such as climate, dust and UV light.

You usually don’t need any type of treatment for a pinguecula unless it causes discomfort. If your eye does hurt, your eyecare practitioner can give you eye ointment or eye drops to relieve redness and irritation.

You can talk to your eyecare practitioner about having the pinguecula surgically removed if its appearance bothers you. In some cases, a pinguecula might need to be removed. Surgery is only considered when it causes extreme discomfort when wearing contact lenses, or is constantly and severely inflamed even after you apply eye drops or ointments.

Pingueculae are known to grow back after surgery in some cases. Your doctor might give you medication or use surface radiation to help prevent this.

Finally, although a pinguecula is non-cancerous, you should report any changes in size, shape or color of any bump on your eyeball to your eye care practitioner.