It affects people of all ages. Although uncomfortable, blepharitis is not contagious and generally does not cause any permanent damage to eyesight. Blepharitis can't usually be cured, but the symptoms can be controlled with good eyelid hygiene. Blepharitis is a long-term (chronic) condition.

There is considerable overlap of symptoms of all types of blepharitis. Blepharitis frequently leads to associated ocular surface inflammation, including conjunctivitis, functional tear deficiency, and keratitis. Blepharitis may also exacerbate symptoms of coexisting ocular surface disease, including allergy and aqueous tear deficiency. The chronic nature of blepharitis, the uncertain etiology, and the frequent coexistence of ocular surface disease make blepharitis difficult to manage. In cases where a bacterial infection is the cause, medications may be prescribed along with eyelid hygiene. Nutritional supplements such as Omega 3, and flaxseed oil are also recommended.

Staphylococcal blepharitis is characterized by scaling, crusting, and erythema of the eyelid margin with collarette formation at the base of the cilia. Chronic inflammation may be punctuated by acute exacerbations that lead to the development of ulcerative blepharitis. Loss of eyelashes and corneal involvement, including punctate epithelial erosions, marginal infiltrates, and neovascularization, may occur

There are three main types of blepharitis:

Anterior blepharitis can be caused by either a reaction to Staphylococcus bacteria – these usually live harmlessly on the skin of many people, but for unknown reasons they can cause the eyelids to become inflamed, or seborrhoeic dermatitis – a skin condition that causes skin to become oily or flaky and sometimes irritate the eyelids, causing the Meibomian glands to block

Posterior blepharitis is caused by a problem with the Meibomian glands, where the glands get blocked by either debris, skin flakes or inflammation. Sometimes blockages in the Meibomian glands are associated with a skin condition called rosacea. If too much oily substance is being produced, this may be caused by seborrhoeic dermatitis.

Mixed blepharitis, which is the most common, is caused by a combination of both anterior and posterior blepharitis. 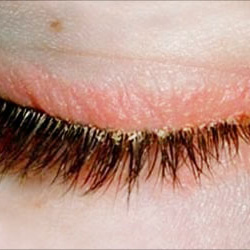 Although blepharitis is one of the most common ocular disorders, epidemiological information on its incidence or prevalence within defined populations is lacking. One single-center study of 90 patients with chronic blepharitis noted that the mean age of patients was 50 years. Compared with patients with other forms of blepharitis, patients with staphylococcal blepharitis were found to be relatively younger (42 years old) and most were female (80%). A survey of a representative sample of U.S. adults (n = 5000) revealed that typical symptoms associated with blepharitis are quite common, and that younger people report more frequent symptoms than older individuals. In another study in the same report, ophthalmologists and optometrists reported that blepharitis was commonly seen in clinical practice in 37% and 47% of their patients, respectively.

According to statistical data, Chronic Blepharitis has the highest incidence of eye diseases. In a survey conducted in the United States (USA), 37% to 47% of patients seen by respondents were diagnosed with blepharitis. In 2014, blepharitis accounted for 700,000 patient visits in the USA. In the past, there has been considerable confusion over the pathophysiology, and thus the definition of blepharitis. Because of these uncertainties, an accurate assessment of the prevalence and incidence of the disease has been difficult to achieve. The objective of this study was to review the literature to present and contribute to the readers information on the incidence and prevalence of chronic blepharitis in the world, and to identify the best medical treatments and interventions. Based on the literature review, there are still many information gaps regarding the best treatment for chronic blepharitis as well as dysfunction of Meibomian gland (DMG).

In conclusion, it is imperative to create multi-centre randomized studies to better understand what is the best treatment for these diseases in order to at least ensure improved quality of life throughout the entire treatment.

Blepharitis is usually a long-term condition. Most people experience repeated episodes, separated by periods without symptoms. It can't usually be cured, but a daily eyelid-cleaning routine can help control the symptoms and prevent permanent scarring of the eyelid margins.

There are three main steps to eyelid hygiene that should be performed once or twice a day:

More severe cases may require antibiotics that are either applied to the eye or eyelid directly, or taken as tablets.

For posterior blepharitis, long-term oral tetracycline, minocycline, or doxycycline is more effective than topical antibiotics, especially for patients with rosacea. As little as one pill twice a week can maintain a relatively good therapeutic dose in these patients for long periods.