Diabetes mellitus (DM) is a major medical problem throughout the world. Diabetes causes an array of long-term systemic complications that have considerable impact on the patient as well as society, as the disease typically affects individuals in their most productive years. An increasing prevalence of diabetes is occurring throughout the world. In addition, this increase appears to be greater in developing countries. The etiology of this increase involves changes in diet, with higher fat intake, sedentary lifestyle changes, and decreased physical activity.

Diabetes is one of the top causes of blindness in the world occurring in both type I & type II diabetes. The blood vessels on the retina become brittle, and fracture, causing small blood leakages that obscure the light from reaching the delicate light sensing cells. This blood is usually absorbed, but scar tissue forms, which is permanent, which also blocks the light from reaching the sensing cells. If you have diabetes, initially you may not notice any changes to your vision. However, in time, diabetic retinopathy can cause mild to severe vision loss in one or both eyes. As a diabetic, it is vital to control and maintain one’s sugar count at a level suggested by your doctor.

The exact mechanism by which diabetes causes retinopathy remains unclear, but several theories have been postulated to explain the typical course and history of the disease. In the initial stages of diabetic retinopathy, patients are generally asymptomatic, but in more advanced stages of the disease patients may experience symptoms that include floaters, distortion, and/or blurred vision. Microaneurysms are the earliest clinical sign of diabetic retinopathy.

Regular eye examinations by an eye-care professional are essential to map out, and best monitor the progression of diabetic retinopathy. 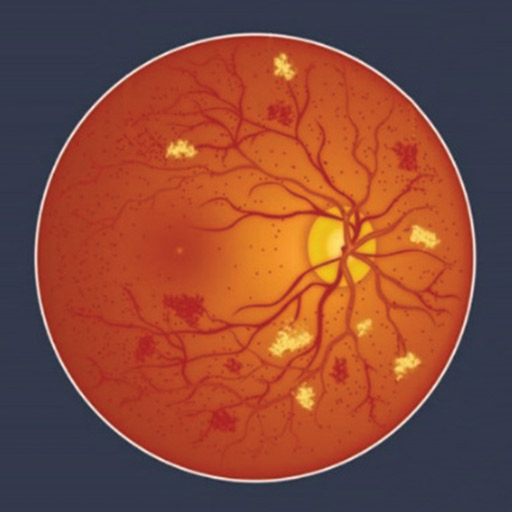 There are two main stages of diabetic eye disease.

NPDR (non-proliferative diabetic retinopathy) is the early stage of diabetic eye disease. Many people with diabetes have it. With NPDR, tiny blood vessels leak, making the retina swell. When the macula swells, it is called DME (diabetic macular edema). This is the most common reason why people with diabetes lose their vision.

PDR (ProliferativeDiabetic retinopathy) often has no early warning signs. PDR leads to macular edema, which can cause rapid vision loss, may not have any warning signs for some time. In general, however, a person with macular edema is likely to have blurred vision, making it hard to do things like read or drive. In some cases, the vision will get better or worse during the day.

Diabetic Retinopathy can be divided into 4 stages:

PDR is very serious, and can steal both your central and peripheral (side) vision. The first time this bleeding occurs, it may not be very severe. In most cases, it will leave just a few specks of blood, or spots floating in a person's visual field, though the spots often go away after few hours. These spots are often followed within a few days or weeks by a much greater leakage of blood, which blurs the vision. In extreme cases, a person may only be able to tell light from dark in that eye. It may take the blood anywhere from a few days to months or even years to clear from the inside of the eye, and in some cases the blood will not clear. These types of large hemorrhages tend to happen more than once, often during sleep.

Chronically high blood sugar from diabetes is associated with damage to the tiny blood vessels in the retina, leading to diabetic retinopathy. In its most advanced stage, new abnormal blood vessels proliferate (increase in number) on the surface of the retina, which can lead to scarring and cell loss in the retina.

Risk factors for diabetic retinopathy include: 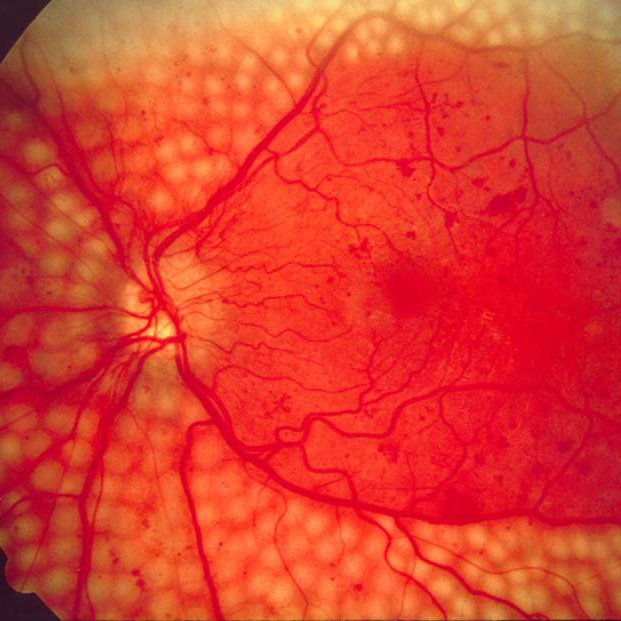 Diabetic Retinopathy affects up to 80 percent of people who have had diabetes for 20 years or more. At least 90% of new cases could be reduced if there were proper treatment and monitoring of the eyes. The longer a person has diabetes, the higher his or her chances of developing diabetic retinopathy. Each year in the United States, diabetic retinopathy accounts for 12% of all new cases of blindness. It is also the leading cause of blindness for people aged 20 to 64 years.

There is no cure for diabetic retinopathy. But laser treatment (photocoagulation) is usually very effective at preventing vision loss if it is done before the retina has been severely damaged. It involves directing a high-focused beam of light energy to create a coagulative response in the target tissue. Panretinal photocoagulation (PRP) is used in the treatment of PDR. It involves applying laser burns over the entire retina, sparing the central macular area.

Cryotherapy is administered when laser photocoagulation in PDR is precluded in the presence of an opaque media, such as in cases of cataracts or vitreous hemorrhage, cryotherapy may be applied instead.

Surgical removal of the vitreous gel (vitrectomy) may also help improve vision if the retina has not been severely damaged. The Diabetes Control and Complications Trial found that intensive glucose control in patients with type 1 diabetes (previously called insulin-dependent diabetes mellitus [IDDM]) decreased the incidence and progression of diabetic retinopathy.

According to The Diabetes Control and Complications Trial controlling diabetes and maintaining the HbA1c level in the 6-7% range can substantially reduce the progression of diabetic retinopathy. One of the most important aspects in the management of diabetic retinopathy is patient education. Inform patients that they play an integral role in their own eye care. Regular checkups by an eyecare practitioner is essential to monitor the progression of DR.